I’m going to take this opportunity to publicise a few charities and causes close to my heart. I fund raise and support some of these guys and they do a great job. I guess everyone has a favourite charity, usually for family or personal reasons and these are mine.

In 2010 I was critically ill. I spent 8 weeks in Intensive Care. My family were told I was going to die. Luckily for all of us, I didn’t. I spent a total of 3 months in hospital. I had lost 3 stone in weight and I could hardly walk. I had developed sepsis and this is what nearly finished me off.
Now, I campaign on behalf of the UK Sepsis Trust.
As a survivor of sepsis, one discovers that it is never really over. Other things happen caused by a combination if illness, medication and long term treatment in Critical Care. I developed PTSD. This effected everyone around me. With help, counselling and my fabulous family, I have it under control most of the time. Awareness is crucial and so I do occasionally speak up about it.

I would like to congratulate you for your brilliant yet emotional talk about sepsis. I thoroughly appreciate it. Your delivery was so engaging that I lost all track of time. By any measure you are a very effective speaker and educator. On behalf of the Ward One team and student nurses, thank you for a memorable presentation and hope you will visit us again. All the best and God bless!!!

In 2018 I set up Lincoln’s first Sepsis Support Group. Backed by The UK Sepsis Trust and the lead sepsis nurse at Lincoln County Hospital, the first meeting was set for January 2019 at Lincoln Drill Hall’s “Room Upstairs.” Expecting only 5 or 6 people, the group was overwhelmed with over 30 people coming along to share experiences and find comfort/answers from others that “understand”
This is now a regular event for Lincoln and the county with quarterly meetings being arranged. You can find more information on the Support group at this Facebook Link– look in the events listings. Alternatively, contact me directly.

Sepsis is a life threatening condition that arises when the body’s response to an infection injures its own tissues and organs. Sepsis leads to shock, multiple organ failure and death especially if not recognized early and treated promptly.
Sepsis claims over 37,000 lives in the United Kingdom annually- more than lung cancer, and more than breast cancer and bowel cancer combined.

Post Traumatic Stress Disorder is a severe anxiety disorder with characteristic symptoms that can develop after the direct experience of an extremely traumatic stressor such as the threat of a violent death or serious injury. Usually associated with war and sexual assault.

One in three people who survive stays in an Intensive Care Unit (ICU) and require use of a mechanical ventilator show substantial PTSD symptoms. (sometimes referred to as Post Sepsis Syndrome)  Further reading here 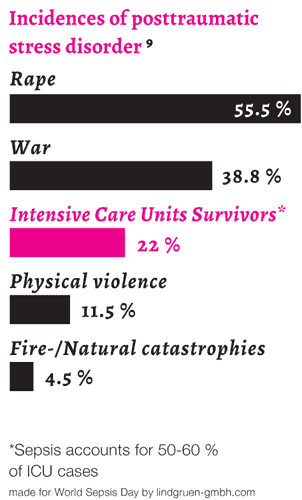 My youngest daughter has had 2 operations to correct this condition. From 2008-2013 I ran the London 10k as part of the Scoliosis Campaign Fund Team (SCF and SAUK) and 2013 both my daughters also ran PLUS Scarlett completed a Skydive just after her 16th birthday. Every year we also take part in the Lincoln Santa Fun Run.

Scoliosis is a sideways curvature of the spine, in which the spinal column can also twist, pulling the ribcage out of position. About 3 out of every 100 people have some form of scoliosis, though for many people it’s not much of a problem. For a small number of people, the curve gets worse as they grow and they may need a brace or an operation to correct it.